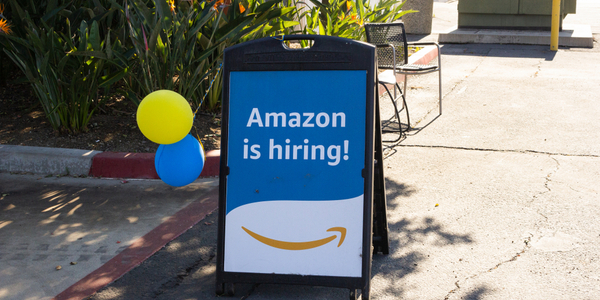 Like many other firms across United States Amazon is also facing labor market constraints. The retail giant has now announced to fill in 125,000 roles across the country. The company announced that they will pay an average of $18 an hour and $22.50 per hour in some locations.

The 125,000 newly announced jobs include both full-time and part-time jobs. These jobs are announced in the departments of retail fulfillment and transportation operations. These jobs will be in addition to 40,000 new corporate and technology job openings announced by Amazon last month.

Full-time employees will get additional $3.50 per hour along with health, dental, vision insurance and 20 weeks parental leaves. Amazon has also announced that they will cover the cost of college tuition including books and fee for its 750,000 hourly employees nationwide. Amazon further announced that they will offer a $3,000 signing bonus to the latest round of the logistic workers they plan to hire. It is the second time they have increased wages and offered signing bonuses in effort to attract workforce. Back in May 2021, they increased the wage to $17 per hour and hired 75,000 employees. Amazon also offered signing bonus of $1,000.

These jobs will be announced across US. Most of the job roles will be in California, Florida, New York and Texas. As per the company statement, 7500 opportunities will be provided in Arizona alone. Amazon also plant to setup over 250 new fulfillment centers, sortation centers, regional hubs and delivery stations in the US this year. Company also plans to open over 100 more buildings.

Last month Amazon’s employees at a facility in Albama voted against joining the Retail, Wholesale and Department Store Union (RWDSU). The company watched this decision very closely.  This recruitment drive was announced soon after that event.

How “Ghosting Coasting” is Troubling US Employers

Teacher’s Crisis in US
Scroll to top